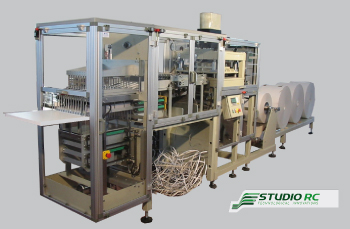 This special automatic machine starts with reels of cardboard and after various working phases produces cardboard trouser guards for laundries.

The cardboard is taken from a reel which is unwound by opposing rubber rollers allowing the cardboard to feed through precisely for the flat-blanking operation, which cuts the shapes each time the cardboard advances.

As the cardboard flat blanks advance, the waste is cut off, while the flat blank is pushed onto a conveyor belt and is guided forwards for gluing followed by hot forming. The shaped cardboard tubes then pause here for a brief instant to be counted and stacked in the magazine where, once the required quantity has been reached, they are expelled from the machine ready for the operator to pick them up.

Note: The machine may be modified to start from the open cardboard flat blank instead of from a reel.